Too Busy Or Too Lazy? This S’pore App Will Find Someone To Get Your Things Done For You 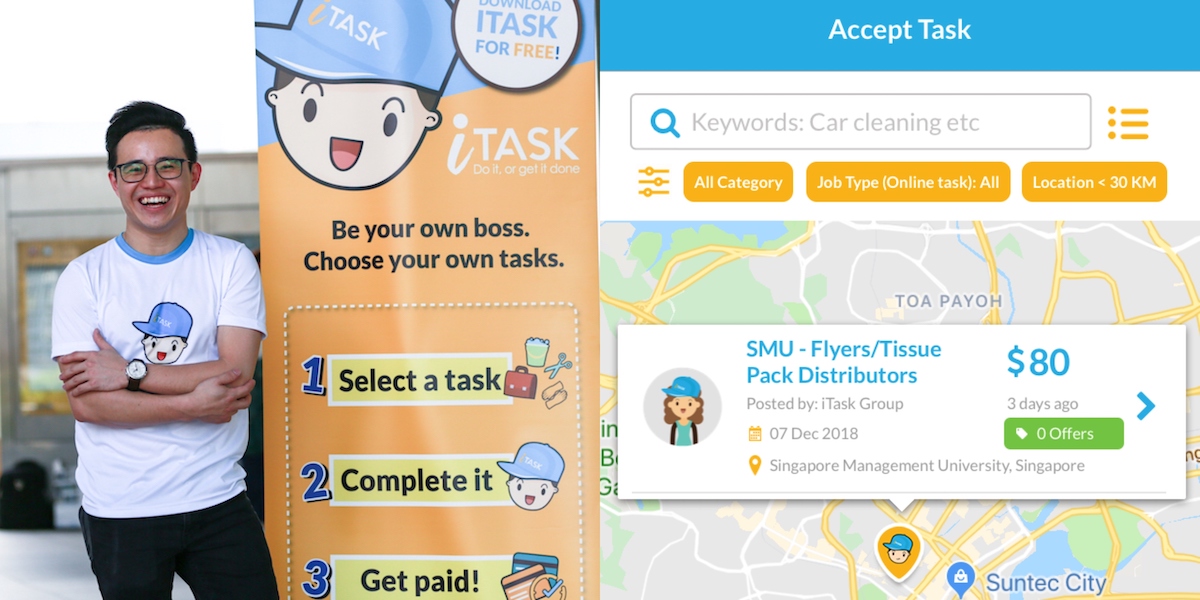 Singapore is a very fast-paced society and it’s no surprise that many Singaporeans feel time-starved.

24 hours in a day seems short for many, and there’s always this niggling feeling that there’s ‘so much to do, but so little time’.

That was exactly how Marcus Cheah felt when he was running his own company, Cre8tech.

“I was so busy that I didn’t have time to do my own chores, so my living condition was sort of embarrassing,” he said.

“I (also) noticed that the sharing economy is booming in Southeast Asia, where resources are also abundant. That’s when I realised that there was a gap that I can venture into.”

One Year To Materialise The App

Marcus is the founder of Cre8tech, which is a firm that creates websites, e-commerce platforms and apps for businesses.

His company is “doing well” and has worked with big names like Gelaré and Tigerair Scoot, among others.

Regardless, the Team spared time and effort to focus on the app.

He was convinced that it is a “very feasible plan”, and roped in friends whom he knew through Cre8tech’s past projects to build the app together.

He recounted the early days when he would shuttle back and forth between Singapore and Malaysia, working together with a two-person team to develop the app from scratch.

With “limited resources and manpower”, the team managed to successfully put together the app within a year.

It was ready by end-2018 and was officially launched. With the positive growing rate, currently iTask has more than 20,000 users in Singapore.

Need To Get Something Done?

Called iTask, it is essentially a service marketplace that connects those who need to get things done, and those who can do things.

In other words, it allows users to go on the app to post a task, job or errand, and engage someone to help out with it. Alternatively, users can browse through the services offered by service providers/taskers, get someone do it for you.

The tasks can range from helping to host a party, hand out flyers, fixing stuff, or even move stuff for the house. Check out the list of tasks and services you can post/find here.

It doesn’t matter how menial the task is, as long as it’s not illegal, stressed Marcus.

Posters can browse profiles, ratings and reviews before accepting the offer, and proceed to chat with the tasker to arrange an appointment.

Payment is only released after the job is completed for a safe and secure transaction.

Conversely, the app also allows users to take on tasks listed on the platform.

You can filter the listings according to locations, nature of task, and compensation rate; so if you have too much time on hand, this is a good option to earn some extra cash!

Alternatively, feature will also allow service providers/taskers to post a service according to own skillsets, and other users can decide if they’re interested to tap on the listed services.

iTask is an app that harnesses the power of the sharing economy, (particularly) time and skills.

“We’re trying to help people, especially millennials, to make time for everything else other then time-consuming chores. Also, people who are short on money (can) reel in additional income.”

Financial Struggles At The Start

With such a lean team, Marcus said they had no choice but to take on multiple roles — from the app development itself, to handing out flyers to get word out about the app.

Source of income was also a constant problem when we were developing the app. During the initial stage, I (had to use) revenue from Cre8tech to cover iTask’s expenses.”

“It was only after we received a six-digit funding in 2018 (did it help) make things easier (for us).

Starting from July 2019, iTask has waived off the 15% service fee. This decision is in tandem with the team’s idea to make a contribution to society, allowing communities to understand and to promote economy-sharing ideas.

iTask hopes to benefit the communities and allow more skilled persons to gain more visibility and exposure with the updated platform.

“What we really want is to continue improving our technology and marketing to bring people more task opportunities, thereby reeling in more income that will help improve their lives.”

With regards to the app launch, Marcus simply described the response as “better than expected”. To date, iTask has reached about 50% active users amongst downloads.

While he admits that “progress may not be of rocket speed”, he is confident that it will improve in time to come.

Marcus added that they’ve “gotten some attention amongst investors”, which allowed them to focus on backend development, which will benefit the demand and supply for services.

He hopes that it will help to generate better monetisation opportunities in the future and bring the business into various new directions.

For now, they’re still dependent on online marketing efforts and co-marketing with other brands to help raise awareness on iTask.

Looking back on his journey with iTask, Marcus said that albeit a short period, the team has learnt a lot of things along the way.

“The one thing that stays constant in this process is change. Lots of them, so you need to be ready for that.

“I honestly didn’t think it was possible to go beyond a random thought, but when you meet people with the same standpoint, a kind of magic happens.”

Keen on checking out the app? You can download iTask for free on Apple App Store and Google Play Store.

The article was originally published on the Vulcanpost.com on May 30th 2019 — https://vulcanpost.com/664967/itask-service-marketplace-app/